The World of The Crown’s Game

I’m obsessed with these drawings of Vika, Nikolai, & Pasha by the amazing artist, Charlie Bowater. 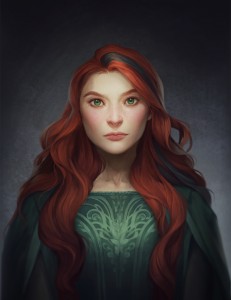 Red flame of hair, with a loud streak of black. Like a volcano erupting in lava and ash, Vika Andreyeva is a force to be reckoned with. She can control the elements, but her emotions—particularly her mischievous streak—often control her.

Which makes her a touch unpredictable.

And yet, there is one constant about Vika: the black stone pendant around her neck. She’s had it since the day she was born.

Age: 16
Hair: Red waves with a lock of black
Eyes: Hazel
Favorite Food: Blini with wild strawberry jam
Favorite Color: The color at sunset when the sky is on fire
Favorite Pastime: Daydreaming about getting off the forest island on which she lives 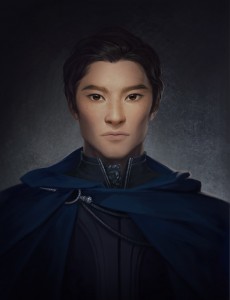 Sharp. Elegant. And a touch morose.

An orphan from the Kazakh steppe, Nikolai Karimov has taught himself everything he needs to know to be a gentleman in St. Petersburg society: his French is impeccable, his dancing, superb, and his honor, irreproachable.

Nikolai is also wickedly good at manipulating mechanical things with his magic, although this talent, he keeps mostly to himself. Ordinary people wouldn’t understand.

Sometimes, being an enchanter is a very, very lonely thing. 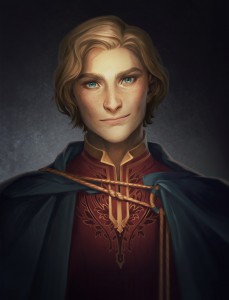 Luckily, when Pasha manages to escape from the rigidity of life in the Winter Palace, he has his best friend, Nikolai, with whom to while away the hours. That is, before Pasha’s duties began to grow more demanding. And before Nikolai started locking himself in his house, doing who knows what.

Plus, she made an awesome behind-the-scenes video of her process, from sketches to finished drawings

While Pasha is cavalier with his role as Crown Prince, his sister, Yuliana, is unsmilingly serious about being the Grand Princess. Although she’s two years younger than Pasha, she often acts as if she’s twenty older.

There is no political machination or negotiation that goes unnoticed by Yuliana. She may not be strong, physically, but she can bring almost anyone to their knees with her intellect. Even the Tsar’s secrets are not safe from Yuliana’s prying eyes.

Age: 15
Hair: Blonde
Eyes: Blue
Favorite Food: Sturgeon soup with champagne. It was a favorite of Catherine the Great; therefore, it is a favorite of Yuliana’s.
Favorite Color: Who has time for colors?
Favorite Pastime: Studying maps

Better not to know from whence Aizhana came.

Better not to see her face beneath her cloak.

And better not to feel her wrath and pain.

A servant in the house where Nikolai lives, Renata Galygina also happens to be the only person (other than his mentor) who knows that Nikolai is an enchanter. He didn’t mean to share that fact with her, but Renata quite literally stumbled upon it one day when she walked into his room.

However, Renata has a secret talent as well: she reads tea leaves.

It makes for a very interesting household.

Countess Galina Zakrevskaya descends from a long line of mentors, those tasked with teaching enchanters how to hone their magical skills. She herself has power of her own, although it’s miniscule compared to Nikolai’s. She uses it mostly to levitate, for she doesn’t like walking on the ground. Too pedestrian.

But just because Nikolai lives in Galina’s house and trains with her doesn’t mean she thinks of him as family. It would be a grave mistake to attribute maternal instinct to Galina. Training Nikolai is a duty and an honor; mothering him is not.

If Ludmila Fanina weren’t a baker, she’d be an opera singer. But she loves baking—she owns Cinderella Bakery, a giant, pumpkin-shaped shop on the forest island where Vika lives—and she still gets to exercise her vocal cords by greeting Vika every morning in song.

Ludmila is a chatterbox, and she also bakes the best Borodinsky bread west of the Ural Mountains. If someone in the village is hungry (for pastry or conversation), they know where to go: Ludmila and her pumpkin bakery.

Alexander Pavlovich Romanov: Tsar of the Russian empire. Defeater of Napoleon. Possible conspirator in the assassination of his own father, the previous tsar.

Also, father to Pasha and Yuliana.

If you are loyal to the Tsar, you will be rewarded. But if you cross him… beware.

Age: 47
Hair: Blond
Eyes: You dare to look the Tsar in the eye?
Favorite Food: Steak tartare
Favorite Color: Gold
Favorite Pastime: The Tsar has no time for such trivialities.