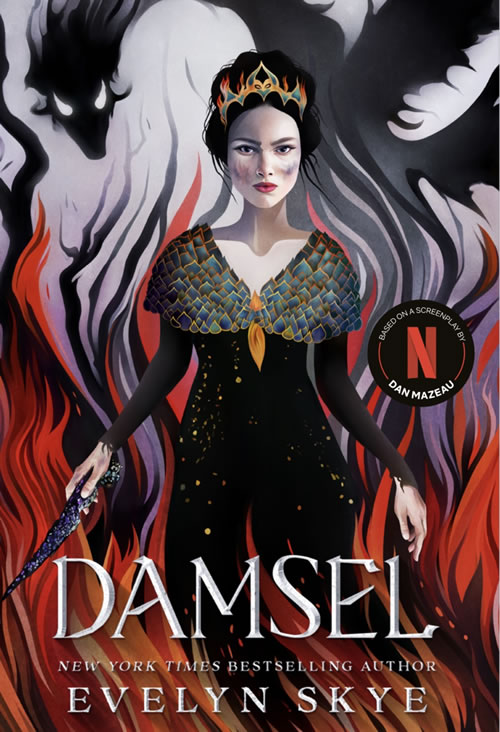 A damsel in distress takes on the dragon herself in this epic twist on classic fantasy—a groundbreaking collaboration between New York Times bestselling author Evelyn Skye and the team behind the upcoming Netflix film Damsel, starring Millie Bobbie Brown.

Elodie never dreamed of a lavish palace or a handsome prince. Growing up in the famine-stricken realm of Inophe, her deepest wish was to help her people survive each winter. So when a representative from a rich, reclusive kingdom offers her family enough wealth to save Inophe in exchange for Elodie’s hand in marriage, she accepts without hesitation. Swept away to the glistening kingdom of Aurea, Elodie is quickly taken in by the beauty of the realm—and of her betrothed, Prince Henry.

But as Elodie undertakes the rituals to become an Aurean princess, doubts prick at her mind as cracks in the kingdom’s perfect veneer begin to show: A young woman who appears and vanishes from the castle tower. A parade of torches weaving through the mountains. Markings left behind in a mysterious “V.” Too late, she discovers that Aurea’s prosperity has been purchased at a heavy cost—each harvest season, the kingdom sacrifices its princesses to a hungry dragon. And Elodie is the next sacrifice.

This ancient arrangement has persisted for centuries, leading hundreds of women to their deaths. But the women who came before Elodie did not go quietly. Their blood pulses with power and memory, and their experiences hold the key to Elodie’s survival. Forced to fight for her life, this damsel must use her wits to defeat a dragon, uncover Aurea’s past, and save not only herself, but the future of her new kingdom as well.